According to KWWL- Dike-New Hartford Community School District Superintendent Justin Stockdale sent a letter to district families offering condolences to those affected by the loss of two people in a barn collapse.

The letter states Andy Kaufman and his son, Beckett, who was about to enter the fourth-grade, were killed when a barn collapsed on them.

Cedar Falls Fire Rescue crews were dispatched to the 9700 block of Viking Road just before 6:30 p.m. Friday. Firefighters said the father and son did not survive the initial collapse and were likely killed instantly. 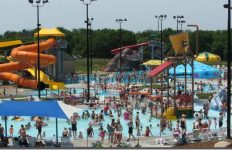